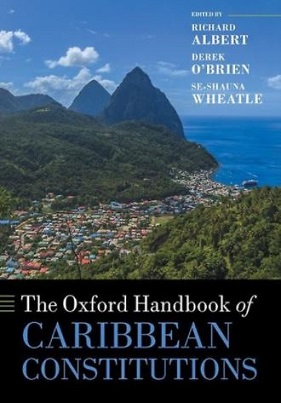 Truman Bodden Law School Senior Lecturer Derek O’Brien is one of the three co-editors of an invaluable new text and reference book, The Oxford Handbook of Caribbean Constitutions.

This is the first book of its kind, bringing together in a single volume a comprehensive review of the entire Caribbean region – from The Bahamas in the north through to Guyana and Suriname in the south, via Belize and all the islands in between.

While written in English, the book embraces the linguistic and cultural diversity of the region, covering, in addition to the Anglophone Caribbean, the Spanish, French and Dutch speaking Caribbean countries and territories.

The new book provides a detailed and contextual analysis of the constitutions of the Caribbean region, examining the constitutional development of the many countries and overseas territories that make up this diverse region. The Handbook examines the key features of each country and territory’s constitutional arrangements and the common challenges confronting the region as it emerges from the shadow of colonialism.

Beginning with a Foreword from the former President of the Caribbean Court of Justice, Sir Dennis Byron, and an Introduction by the lead editor, Richard Albert, the remainder of the book is divided into four parts, which are grouped thematically.

The book starts with an introduction to the legacy of colonialism and its imprint on Caribbean constitutionalism and proceeds in parts two and three to provide a detailed account of the region’s constitutions, before turning to examine the protection of fundamental rights, including social and economic rights.

The concluding part addresses the challenges and prospects for the region by reference to constitutional interpretation, constitutional reform and the dual jurisdiction of the Caribbean Court of Justice, which is unique amongst international courts.

Commenting on the assignment, Mr. O’Brien said, “This book has been three years in the making and is the product of a huge collaborative effort involving scholars from across the Caribbean, the UK and mainland Europe. Happily, I believe that it has been the worth the effort of all who have been involved with this project.”