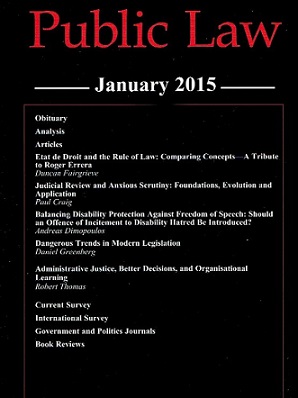 TBLS lecturers, Derek O’Brien and Rhian Minty, have recently had an article accepted by Public Law, the leading journal in its field in the UK. The title of the article is “The Challenges of Multi-layered Governance and the Fight for Same Sex Marriage in Bermuda and the Caribbean Overseas Territories”.

The article examines the two most recent judgments of the Bermudan and Cayman Courts of Appeal regarding the constitutionality of the prohibition on same sex marriage in each territory. The article adopts a contextual approach which takes account of the surrounding political, social and cultural forces that have informed the debate about the issue of same sex marriage in both jurisdictions. The article further considers the UK’s constitutional responsibility for the implementation of human rights norms in Bermuda and the Caribbean Overseas Territories. The article concludes by offering a critique of the UK Government’s response to the refusal of the governments of Bermuda and the Caribbean Overseas Territories to permit same sex marriage in their territories.