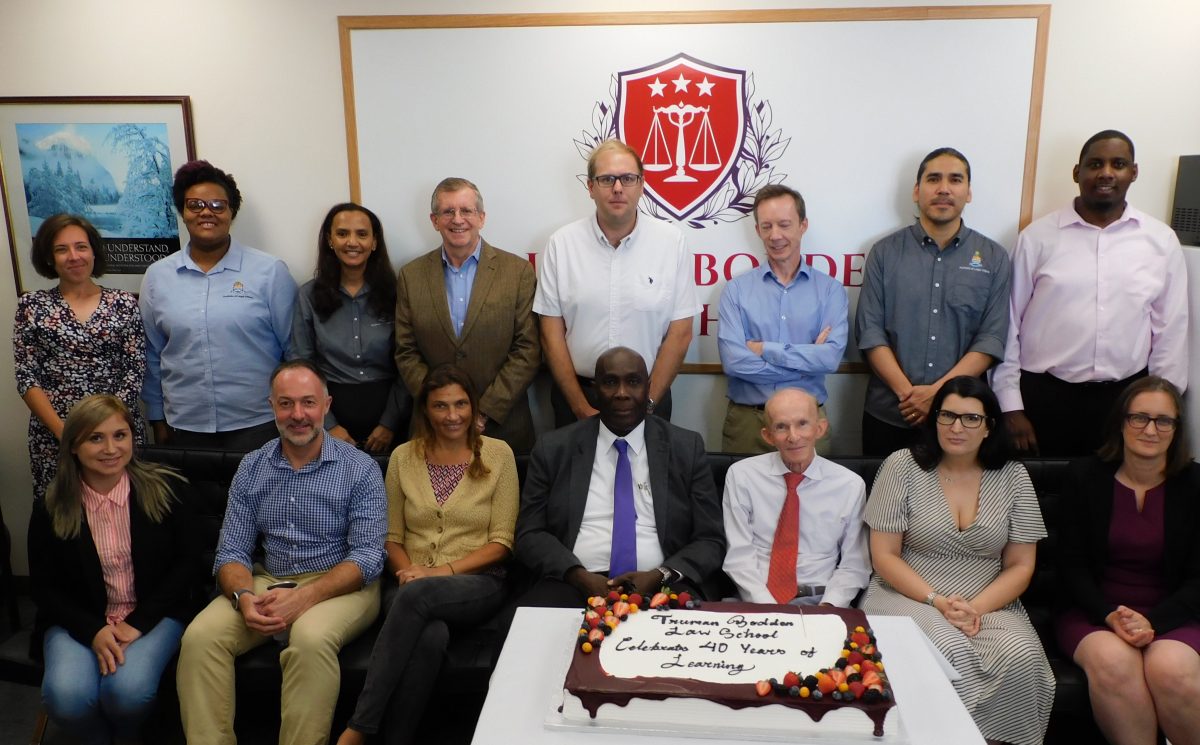 The Cayman Islands Law School’s story started on September 27th 1982 with a cast of five pioneering law students, a lone director, Mr. Peter Rowe and a single law programme, the Attorney at Law qualification. Peter had arrived in Cayman in 1982 on a two year secondment from the University of Liverpool. This arrangement planted the seeds of the partnership with the University, the law school’s most enduring overseas affiliate partner. Within a couple of years of Peter’s return to Liverpool in 1984, the University’s Bachelor of Laws degree programme (LL.B) was introduced and 1987 witnessed the first graduating class from the programme. The introduction of the LL.B degree was a watershed moment in the history of the law school and one which was in no small measure due to the efforts of Peter Rowe, by now a Senior Lecturer at Liverpool University. Indeed it is no exaggeration to say that without Peter’s involvement with both institutions, the link with the University of Liverpool would never have come about.

Peter Rowe taught both existing Premier, Hon. Wayne Panton, and former Premier, Sir Alden McLaughlin, along with a number of future law firm partners. Peter had an enduring affection for the law school and its students and regularly kept in contact with the present Director, Mr Mitchell Davies, B.E.M. Writing to the Director Davies on the occasion of the Law School’s 30th anniversary in September 2012, Peter recalled:

I remember very well going to London for the interview for the Directorship of Legal Studies, which had been advertised in The Times (during a snowy February). When I received the letter inviting me to take up the post I asked the University of Liverpool, where I was then a Lecturer, for 2 years leave of absence (this was the period of the contract). They agreed and I set off for Cayman in August of 1982. When I arrived there was literally nothing (no rooms, students etc). To make a start for the 1982-83 academic year I had to have it up and running by late September.

As you will know, this happened. The Governor formally opened the Law School with me and 5 students at the Law Courts Building in September 1982. Almost immediately the next thing to do was to try and get another lecturer and one thereafter for 5 years. The support of the then Attorney General (Michael Bradley) and the Chief Justice (Sir John Summerfield) was magnificent.

I must say I continue to feel the greatest satisfaction at the success of the Law School over such a long time. That it is in this position owes so much to you and your long-term development of it. I had the good fortune to be selected to start it off. You had the vision to set it on a sustainable basis so that it could continue (now) for 30 years.

A visionary and pioneer in the development of the Law School in 1982 was the then Minister of Education and Cayman Islands attorney, the Hon. Dr Truman Bodden, OBE, after whom the law school has been named since 2012. It is appropriate that the University of Liverpool saw fit to confer an Honorary Doctor of Laws (LL.D) on Dr Truman Bodden OBE at the Law School’s Graduation Ceremony held in August 2014. This marks only the second occasion that this honour has been conferred by the University in the Cayman Islands, with the first honorary LL.D having been conferred in 2006 on the Honourable Chief Justice and Chairman of the Legal Advisory Council, Dr Sir Anthony Smellie QC. Dr Truman continues to support and maintain an active interest in the law school and keeps in regular contact with the Director, and is a regular attendee at the law school’s annual Graduation Ceremony.

The next landmark development in the evolution of the law school was the introduction in 1991 (during the tenure of third law school Director, Rick Finlay) of the full time LL.B (Honours) degree which remains the flagship qualification offered by TBLS. During the succeeding three decades, subject to the oversight of the Legal Advisory Council (whose members include the Hon Chief Justice and the Hon Attorney General) and under the leadership of the current Director, the law school has gone from strength to strength.

In September 1994, three years after the introduction of the Honours degree programme, the postgraduate Professional Practice Course was launched, directed at successful graduates of the LL.B (Honours) degree, who wished to enter into local legal practice. This qualification was awarded firstly by the Legal Advisory Council and subsequently by Queens University Belfast. 2017 witnessed the development of a new postgraduate partnership with Oxford Brookes University (“OBU”), the current awarding body for the Professional Practice Course. Successful graduates of the OBU Diploma are eligible to pursue further postgraduate study with OBU, leading to the University’s Master of Laws in Legal Practice.

September 2017 also saw the introduction of two new part time postgraduate programmes: the postgraduate Diploma (“PG Dip”) and Master of Laws (“LLM”) in International Finance, both awards of the University of Liverpool. The first graduates of this programme (now also offered full time) graduated with a Masters’ degree in International Finance in 2019.

It is fitting that the new academic year, marking the 40th year since the law school’s founding, witnessed another healthy enrolment with well over one hundred students registering on its undergraduate and postgraduate programmes. Whilst the size of TBLS and the number of programmes offered makes the institution almost unrecognizable from the early days, one constant that has defined the law school over many generations of law students is the caring and dedicated lecturers and non-teaching staff who have been the bedrock of this institution for the past 40 years. TBLS continues its journey with conditions set fair for the final decade of its approach to what will be an historic half century (not out).